Do You want the revolution?

Until 2000 most of Human history has been relatively dull… This chart shows The Human Development Index ( a measure of human achievement ) as well as the world’s population since 2000 are literally progressing at an exponential rate. 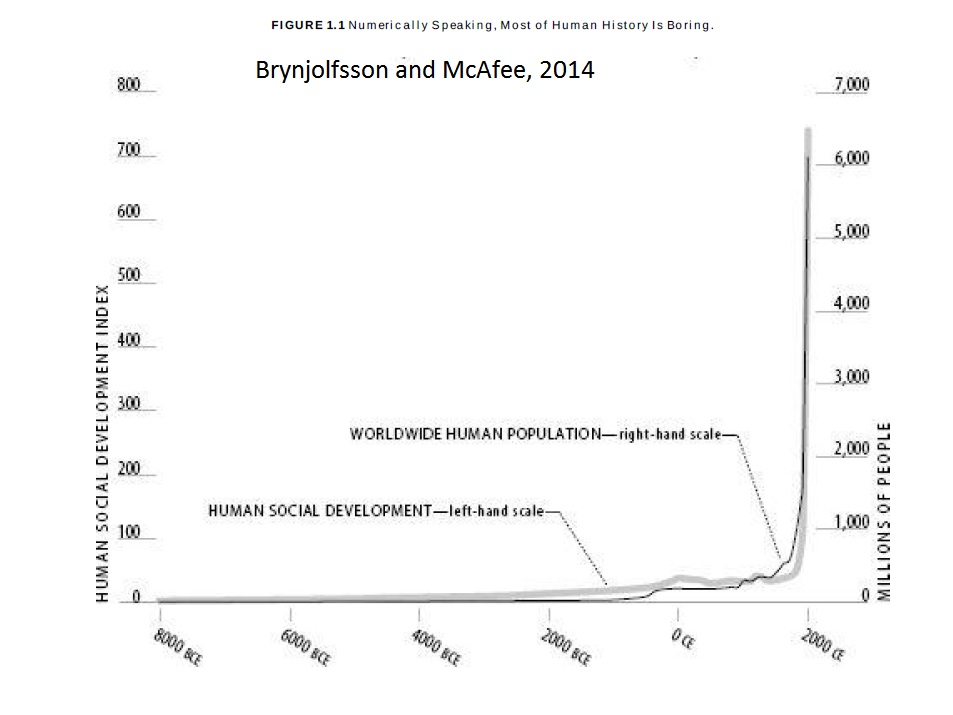 Is technology a blessing or a curse? Technology is the major catalyst of this trend as well as causing the wholesale destruction of established businesses at an ever increasing rate. This will continue unabated as legislating against technology is rather counterintuitive: so this trend is probably unstoppable?

Disruption to businesses is NOT from the technology itself. Technology is only a catalyst (it remains unchanged): what matters is the way in which technology is applied: they way it that enables people, services and products and supply chains to connect in different ways to create an ever evolving solution. Or put it another way technology can bake a more attractive cake from the same basic ingredients.

How does this manifest itself? In the case of UBER: UBER has cut out the entire overhead structure of global taxi firms by creating a direct route to the customer. In the case of autos the shift of power is moving away from the auto OEMs to the 1st tier: Bosch Continental and Delphi now lead the key technologies, styling and handling aspects and now file 100% more patents than the Auto OEMs. With a fall of S&P 500 longevity from 61 years to 18: the faster rise and fall of majors is the new norm. The Fintech attack on the traditional banking sector is picking the profitable aspects of a bank leaving a nasty cocktail of the lower value adding transactional products alongside the regulatory burden. Tragic haha.

Even wealthy will no longer be able to ignore the social Impact: The impact on people is vast: an increase in degree educated, already almost a complete removal of middle management and for those at the bottom end (13m in the case of the UK): a trap on the min wage, poverty and subsidies. The next phase of technology will reduce the number of roles at the bottom end which will increase the those 13m already in poverty.

So what is the response? Companies are under attack, average intelligence is not enough, lower barriers and ever more powerful technology is making more disruption easier.

What’s the typical response? At a micro level: purposeless businesses, change imposed on employees, stress, revenue land grabbing, discounting, over familiarity blinds execs to their core of a business, business models become misaligned and the value of brands is eroding. In a macro environment of lowering growth and increasing debt.

Whats the hidden implication? The hidden challenge that investors can’t hide from is the disparity in wealth, and removal of the safety net: the reduction of the welfare state. This affects the way this affects markets and society operate so someone will have to pick up the tab.

Where is the value now? Company integrity and honesty facilitated by humility, the courage to create your own certainty, the means to deliver new products and services faster, delivering change with a love for the people, entrepreneurship at the bottom end of society, short cash efficient supply chains, recognising and selling value that companies become blind to, marketing direct to consumers to usurp the corporate.

In terms of future proofing businesses this is defined by how the people are performing and how well aligned resources are how to profitably commercialise opportunities quickly.

A company is turned around once it is cut the businesses back to a defend-able core; this is now the seedbed of creating business value. Most executives however through over familiarity naturally remain blind to their core business, and often the unfamiliar scenario they face: it’s therefore tough to defend it!

Icebreaker have pioneered the lateral art of putting under performing successful and distressed businesses back together, the means to seamlessly engage and implement at unbelievable speed, recognise the core business and create business models that are scalable and defend-able.

Speed is the capability to increase profit: In a business critical situation when a corporate says that will take years we have had the privilege many times to achieve the same result in days or weeks & transform the culture at the same time. Why because its an imperative and need drives. It’s all about people and having a love and passion for people. How do you develop and bottle that?

Thanks to all those who voted for us we won the Global Turnaround Firm of the year in 2015. We are staggered, raring to go and I hope not complacent.

We would love to have a chat to identify how we might be the catalyst of your team to enable you lead the disruption, stay and remain a long way ahead, and make enduring profits and see your people and refreshed organisation excel.