The 12 challenges for the UK economy

1. The UK ONS is presenting a diluded view of the UK economy

“The Office for National Statistics (ONS) confirmed that the UK economy is on the road to recovery when it released figures on 26th September confirming that it grew by 0.7% in the second quarter of 2013.

2. There are no rules involved in managing a countries finances

The issue is there are no rules when it comes to managing the finances of a country. If the UK was a UK company, as it has no chance of paying back its debt, you might consider prepacking the UK, and review whether the government is trading to the detriment of its creditors.

In terms of structure, who are a countries creditors? They are us. What is tragically missing is an awareness that our children that have to pay back this debt and there is no magic fairy only politicians and their magic wands.

4. Ownership of UK companies is changing

In the meantime over 50 pc (53%) of the UK is for the first time ever owned by foreign investors and my guess that this % will continue rise with time, further draining the profits and tax returns for the UK.

5. Forecast vs actual revenue is a good indicator of the credibility of any plan: 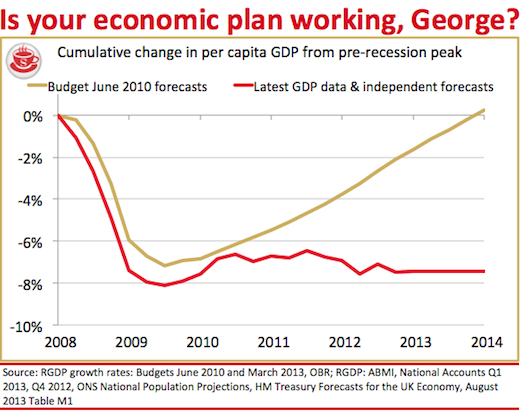 The good news is that much is left off the UK plc balance sheet and there is no real obligation to present proper information on the UK plc balance sheet either. Nor is there a proper public analysis of the ability of the economy to meet its ever increasing pensions and other commitments down the track. The last all inclusive UK plc balance sheet estimate was that UK debt was 9x GDP. The Weimar republic had 9x GDP debt. The only outcome of any economy with that level of debt has been a complete economic collapse. 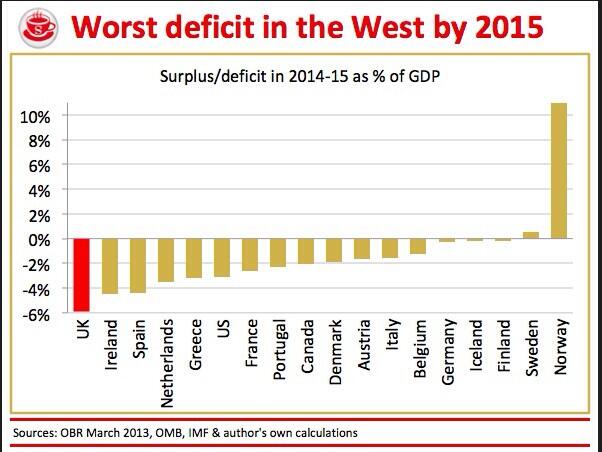 The other serious underlying issue is that the concentration of wealth is severely limiting most economy’s recovery. It too is getting more extreme, limiting the flow of cash amongst the masses buying ordinary thing. This in turn will bump up taxation in order to redistribute cash to the masses as the public sector mechanism to look after the have not’s.

This is a great summary that captures a similar challenge in the USA, in the last 30 years earnings of the top 1% have more than tripled to 24% of all USA income!

9. The situation in the USA could rock the global economy… The FD reports Christine Lagarde from the IMF saying that raising the US debt ceiling is now mission critical.

These are the notes from the ERC: “Since May, the total public debt has been right at the limit (for possibly the longest period of time in recent history). However, government finances are now at a point where the debt ceiling must again be extended before 17th October, or the US will be forced to default on some of its debt for the first time. This would be an economic disaster, probably on a global scale. At the beginning of the year, we didn’t doubt that the ceiling would be lifted. It will probably be lifted again. However, with all attention on the current budget stand-off, it is hard to feel so confident this time around.”

10. Some Global Challenges – where will the shifts in Global economic activity take place?

11. Where are the centres of business activity currently?

12. The UK Government are changing the law to ensure UK pension funds are obliged to buy UK Government bonds.   Surely that is an attempt to fix a market, and putting all of ones eggs in rather a ropy basket?